The Week of Hats!

This week I was able to complete not one, but two crochet hats! I usually make a lot of blankets, but I’ve sort of turned to quick projects for the moment. It’s a lot more gratifying to get something done in a couple days instead of a couple months. Of course, it doesn’t mean I’m going to stop making blankets because I think they are so beautiful!

The first hat I made was for my best friend’s daughter, Abigail. She turned three this week so I wanted to make her something special for her birthday. I found the pattern here. I love this purple yarn I found at Michaels. It has little hints of sparkles – so pretty! 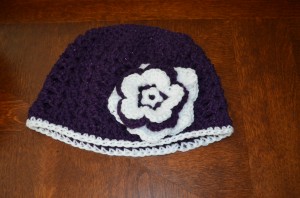 After I completed that hat, I felt inspired to make another one, but use a different pattern. I had a bunch of leftover yarn from Ruby’s blanket, so I decided to use it. I found the pattern here. Now, you have to promise not to laugh at my photo. First, I think the pattern and these colors look like the hat is made for a man – but I’m wearing it. Second, it’s just not a good picture of me. Here it is anyway! 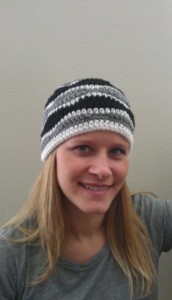 What do you think?

I felt weird in the black and white hat so I gave it to my nephew last night. Hopefully he will enjoy it!

Now that these hats are out there, ready to be worn, they’re going to have to wait. It’s about 90 degrees here today and it’s going to be 104 degrees in a couple days! It’s supposed to be fall y’all, but the weather in Southern California isn’t cooperating!